You must see Peles Castle! 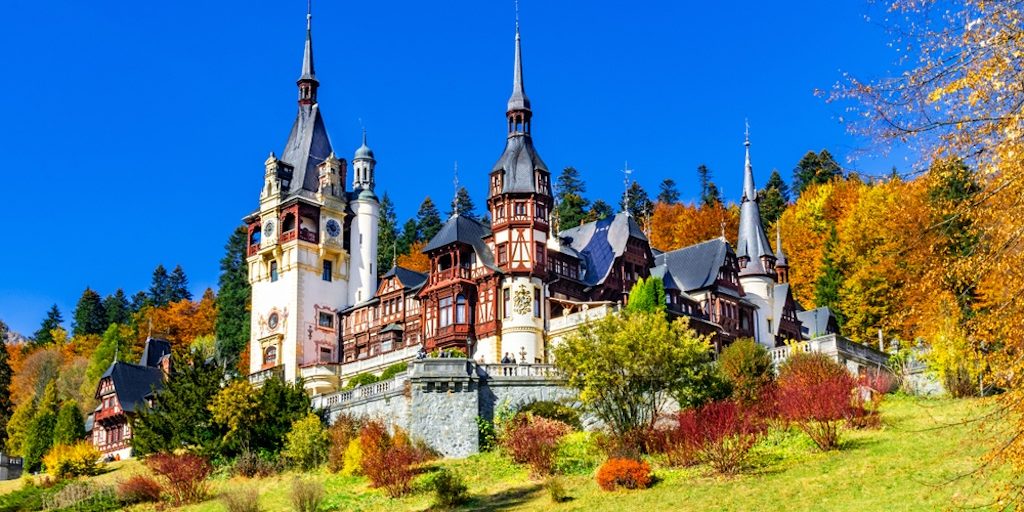 The castle is built on the royal domain of Sinaia, land acquired by Prince Carol in 1872 after he fell in love with the magnificent mountain scenery in the area. The construction began in August 1873 and was funded both from the private accounts of the prince and from public funds.

The castle’s plans were made by German architect Johannes Schultz, who won Carol’s sympathy with a neo-Renaissance German-inspired architecture.

Peles Castle has a unique architecture

Queen Elizabeth and King Carol I lived in the haunting house before the castle was over in 1883. Having its power plant Peles was the first electrified castle in Europe. By facilities after 1900, the residence was raised one storey, and also the main tower.

In its final form, the 3200 sqm building has 160 rooms and over 30 bathrooms. In its 160 rooms, the castle housed one of Europe’s most important collections of paintings and a rich collection of weapons with over 4,000 European and Oriental pieces from the 14th-17th centuries.

The beauty and richness of carved woodwork and colored stained glasses earn the admiration of visitors. Peles Castle visits 35%. The honor hall, a reception hall made in 1911 by Karel Liman from a former courtyard, is richly decorated in wood and has a stained glass roof. Arms rooms were arranged between 1903-1906, and the boardroom, rich in intrusions in 1914.

You do not regret a second if you visit Peles Castle!

The Florentina Hall, the Grand Salon, is decorated in the Italian neo-Renaissance style. The Ludovic XIV style theater hall has 60 seats and the royal lodge. The imperial apartment was arranged in 1906 in the style of Maria Theresa for the visit of the Emperor of Austria-Hungary, Franz Josef.

After King Mihai’s abdication, in 1947, Peles Castle entered the tourist circuit, and the culture people of the time used the other buildings. After the entire complex of communism was closed in the last years of communism, today only the Foişor remains a presidential residence. The Economat and Garda Corps are equipped with hotels, restaurants and other buildings have become tourist or protocol villas.

The most important halls to visit in Peles Castle

The Honor Hall is grandiose, with walnut wood paneling, wall-mounted with bas-reliefs and stadiums. The mobile glass ceiling, powered by an electric motor or manual system, was a surprise for the King’s visitors, who could admire the sky in the summer nights.

The royal library attracts especially those passionate about rare books, with leather covers and engraved in gold letters. Even for those less familiar with the book universe, there is a point of attraction: the secret door, a way of accessing a bookshelf, whereby the king could escape in various rooms of the Castle.

The music hall became a musical party salon at the request of Queen Elizabeth. The furniture here was received from the Maharajah of Kapurthala.

The Florentina Hall also called the Grand Salon, impresses with its gilded ceiling, gilded lime wood, the two large chandeliers, and the decorations in the Italian neo-Renaissance style.

The Maura Hall is the work of the architect Charles Lecompte du Nouy, with Hispanic-Moorish elements, with a Carrara marble fountain, a copy of a Cairo piece.

The theater has 60 seats and the royal lodge is decorated in Louis XIV style.

The Turkish Salon that shelters a collection of Turkish and Persian pots in brass.

The Imperial Suite was also arranged in 1906 on the occasion of the visit of the Emperor of Austria-Hungary, Franz Joseph I, invited to the 40th anniversary of the reign of King Carol I.

On the first floor was the Concert Hall, set up in 1906, featuring a bell tower executed in Antwerp in 1621, a Bluthner vertical piano and a two-key Rieger organ.

In the end, I will tell you where is Peles Castle situated. Peles Castle is located in Sinaia, on the road is the European Road E60 or DN1. There are numerous races on the railway, which from Ploiesti enters the Prahova Valley, and Sinaia resort is one of the destinations.